I really don’t like to go out when my son is home. Mom guilt is real and it doesn’t get any easier the older he gets. He’s in the phase of really wanting me home to read him a book before bed. Which I completely understand. I remember being young and hating when my parents went out and left my sister and I at home with a babysitter. However! On occasion, when it’s really worth it, I will leave my son with my parents and experience a night on the town. Getting a chance to watch “Watch What Happens Live” with Andy Cohen during his LA week, was one of those times!

I was lucky enough to receive free tickets through On-Camera Audiences for the Sunday night show. Of course I took my sister who is a Bravo Fanatic. I really had no idea she loved Bravo and Andy as much as she did. Which ended up being perfect because it’s so much more fun to enjoy something like that with someone who LOVES it all. Our guests were Nene Leakes, Lena Waithe, and of course James Kennedy in the DJ booth.

We had to be there at 6pm – which really was code for – be there at least by 5pm. I picked up my sister at 2 and we were on our way. We stopped for an early dinner at Bottega Louie, one of our favorite restaurants in downtown LA. I used to live in DTLA before I had my son and would frequent this restaurant a lot. I love the New York restaurant vibe it gives off, the amazing food and yummy cocktails. If you have a chance to go, I definitely recommend it. 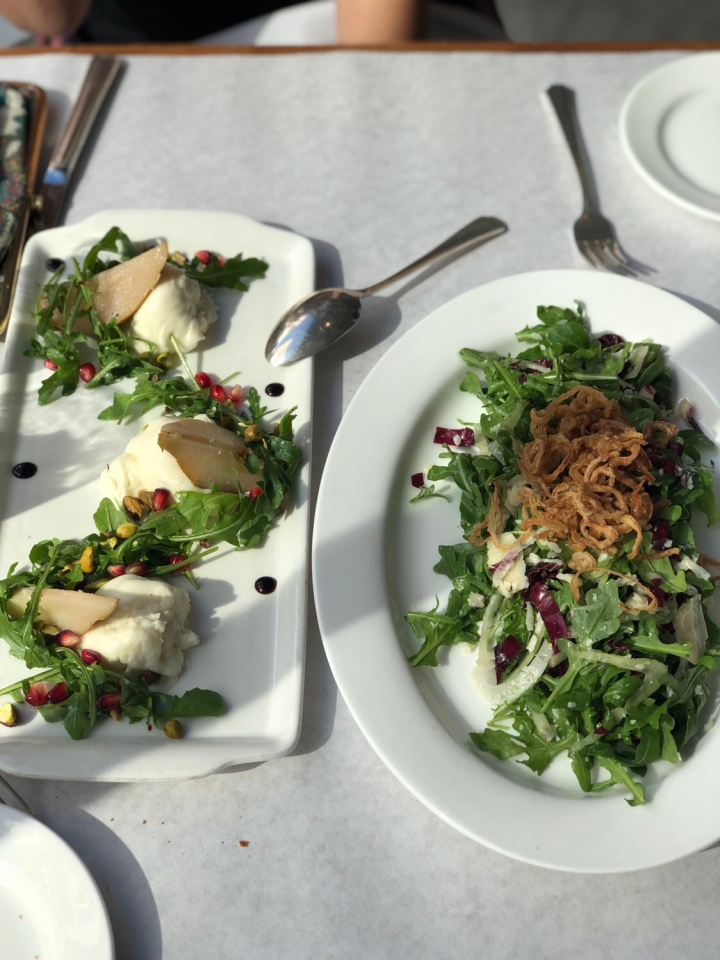 After dinner we drove straight to The Wiltern. Can I just pause right here for a moment for a quick backstory? I grew up in the era of all the fabulous pop-stars (Britney Spears, NSYNC and etc) and I used to drag my sister to all kinds of crazy concerts, watch countless hours of performances and talk endlessly about their lives. So, driving up to LA to see Andy Cohen felt like we were giving an homage to our teenage self. It was really fun getting all giggly and excited about what was to come.

We pulled up and I could see a line had already formed. I wasn’t surprised but still we needed to move fast. Without even really knowing what the line was for, or where I should park, I made my sister get out of the car and get in line. I think my 17 year old self reemerged in that moment! I was stuck at a light and watched her get in line, look ahead and then leave the line. I started to panic. I love my sister but she’s not somebody you want to put in charge of these situations. My light changed and I finally could drive and look for parking. And then I saw it: the line had wrapped around the building. I quickly parked and met up with my sister. By the time I got to the line they had already handed out wristbands to everyone that had shown their ID. And I forgot to bring the tickets from the car! More panic. I “ran” back to the car (have I mentioned I was wearing heels) and came back just in time for another ID check and ticket check. Phew! We got our wristbands which secured ourselves a seat inside.

While we were waiting to go inside, all of a sudden we heard a bunch of cheering. It was Andy Cohen! He was making his way up the block, saying hi to all of the fans. He didn’t make his way to us but we did see him in the distance. The excitement began to grow… 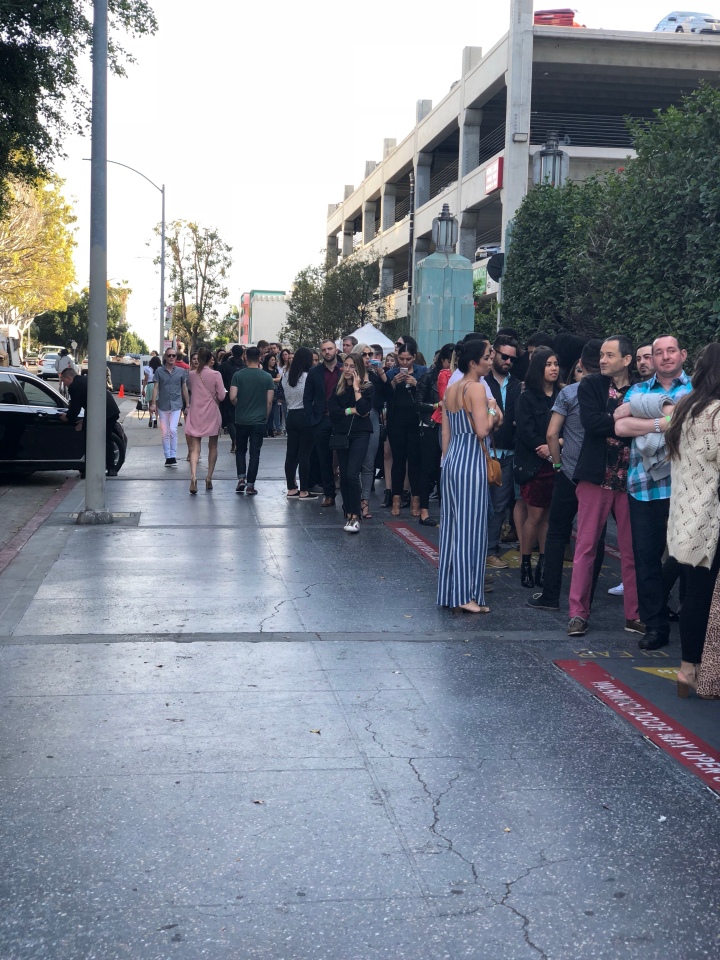 After making small talk with the people around us, and posing for one too many selfies, it was finally time to head inside! It was a little bit chaotic when we first got inside. We were instructed to head upstairs and find a seat. The line to get in was so crazy! Between the line to find a seat, the line to get a drink and the line to go to the bathroom – I really didn’t know where to stand. But a wonderful stage manager got everyone hustling and we finally, got to our seats.

Once we secured our seats, I checked in with my mom to make sure my little guy was okay. He was happy and sound asleep. Now I felt I could really enjoy my night. Does anyone ever feel like that?!

Before the show started, I grabbed a couple of drinks and then beaded back to wait for the show to start. We were up in the balcony; dead center, perfect view! 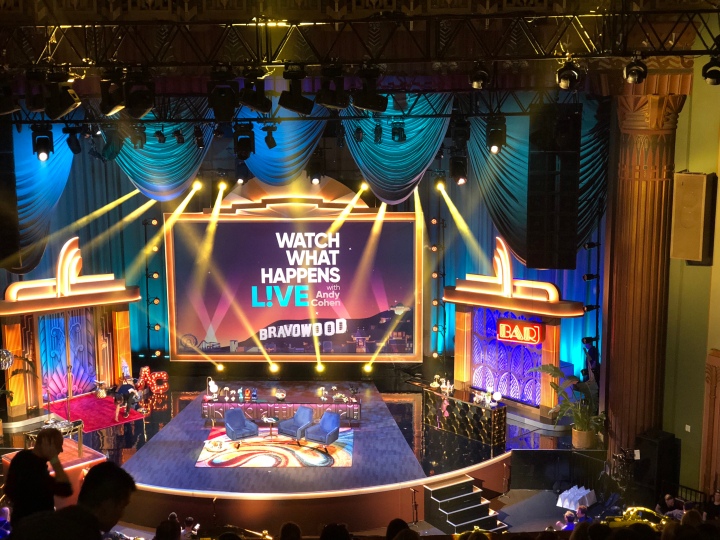 The stage manager came out and gave the run down of how the show was going to go – it really was going to be live! I’ve been to a lot of taping for shows that say they are “live” but they really weren’t. I was shocked there wasn’t going to be even a tiny bit of a delay.

Before it was time to go live, Andy Cohen came out and introduced himself to the audience and answered any questions that were asked. I couldn’t believe it! Like I said, I’ve been to a lot of taping and I have never had any host/actor do this. He was SO nice. He’s just like how he is on TV; a little goofy, really funny, and super sweet. I think I fell in love, haha!

The show started and it was everything I thought it would be and more! It really ran so smooth. My only complaint was that I was a little disappointed that they didn’t have any surprise guests. The doorbell rang and everyone in the audience gasped and sat up straighter with anticipation. But, it was just the “gay shark” with a shot ski. I’m not even exaggerating; the whole audience sighed with disappointment. I felt bad for Andy! Besides that, everything was great. The after-show was even better! If you have a chance to watch it, you need to. It was hysterical. A guy from the audience asked Andy out on a date and Andy really didn’t say no! I still am wondering what happened with that. Anybody know?

After the show my sister and I headed back to our homes. Whenever I’m in LA, I always walk away missing my old life. But, I couldn’t imagine that same life with a kid. It’s just nothing something I want for his life. And as much fun as I had that night, I couldn’t wait to get into my bed and snuggle with my baby. I promised B I would “scoop” him when I got home. Scooping is when I take him out of his bed when he’s sleeping and being him into mine. I always promise him a scoop when I’m not there to put him to sleep. I like to give him something to look forward and a reassurance that I will always come home. Do you have any traditions that you do when you go out without your kids? I’d love to hear them in the comments!

My Party of Two

My Party of Two

We enjoyed our last (in-person) Angels game of the season tonight. All B wanted was to see a home run and he got to see 2! We are already talking about the different stadiums we would like to visit next year. Which ones should we put on our bucket list?? #gohalos
Happy Nationals Sons Day to the best little man I know. I made this video in 2015 (B was about 2). It’s still one of my ultimate favs. Love this kid beyond. #nationalsonday
Not ready to say goodbye to the weekend. If I had it my way, I would do fun things with my B every single day of the week. But for now, I’m grateful for the weekends and Apple Picking at our favorite place!
B got Mike Trouts ball tonight and this kid was the happiest - happiest! His favorite position is centerfield and is always overjoyed when we sit in the outfield. Tonight will be a core memory for sure ⚾️ #gohalos
I’m sorry Dad but I couldn’t resist. The real question is - did he take off his socks and shoes!?
👩‍🍳 Enjoy some Blue Fairy Wands while you watch the Pinocchio on Disney+!
Join 198 other followers